Frank Ackerman received a BA in mathematics and economics from Swarthmore College in 1967. After serving for two years as a conscientious objector during the Vietnam War, he entered graduate school, and received a PhD in economics from Harvard University in 1975.

He was a founder of Dollars & Sense magazine, where he worked as a writer, editor, and business manager from 1974 to 1982. After two years as a visiting professor (at the University of Massachusetts’ Amherst and Boston campuses) and one year as a computer programmer, he joined Tellus Institute, where he studied the economics of energy systems, and of solid waste and recycling, from 1985 to 1995.

From 1995 to 2007 he worked at Tufts University’s Global Development and Environment Institute (GDAE). He was an editor of GDAE’s Frontier Issues in Economic Thought book series, a coauthor of GDAE’s macroeconomics textbook, and director of the institute’s Research and Policy program. For several of his years at GDAE, he also taught in the Tufts Department of Urban and Environmental Policy and Planning.

From 2007 through 2012 he was at the Stockholm Environment Institute’s U.S. Center, also at Tufts University, where he directed the Climate Economics Group.

Since 2012 he has been a principal economist at Synapse Energy Economics, a public interest-oriented consulting firm in Cambridge, Massachusetts. In 2014-2015, he was a lecturer in the Department of Urban Studies and Planning at the Massachusetts Institute of Technology, teaching graduate seminars on Electricity, Economics and the Environment, and Climate Economics and Policy. In 2017 he is also a research fellow at Boston University’s Global Economics Governance Institute, collaborating in research on trade and the environment. 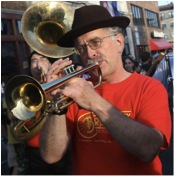 He was a co-founder, and is a member of the steering committee, of Economics for Equity and Environment (E3 Network). He is a member scholar of the Center for Progressive Reform, an organization offering progressive scholarship and writing on environmental law and regulation.

In addition to his day job, he is an amateur trumpet player in the Second Line Social Aid & Pleasure Society Brass Band (SLSAPS), playing New Orleans-style and other music at community events and good causes in the Boston area.

For a resume, see the Synapse Energy Economics website.