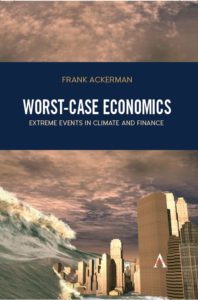 Old-fashioned economics has led to dangerously wrong-headed approaches to climate change and other “extreme event” situations, such as financial crises. In this highly accessible but profound book, Ackerman persuasively shows the urgency of smarter, more recent thinking about how natural and economic systems work and why we need to pay much more attention to worst cases. This is a must-read book for anyone who wants to understand the world we now inhabit.

Ackerman’s Worst-Case Economics will convince you that the conventional economic modeling of risk is inadequate when financial crashes, environmental collapse and other cataclysmic outcomes are possible and that policies based on prudence regarding the worst-case scenario are needed. An important book and a delight to read.

Worst-Case Economics: Extreme Events in Climate and Finance can be ordered from Amazon, Barnes & Noble, or Apple iBooks.

The stock market and the climate are well-behaved most of the time – but those are not the times we worry about. Worst-case scenarios are all too real and all too common. The financial crisis of 2008 was not the first or the last to destroy jobs, homeownership and savings for millions of people. Ever-weirder weather includes megastorms clobbering communities from New York to Bangladesh, rising sea levels, and heat waves killing thousands across Europe.

Climate and financial crises are serious events, requiring vigorous responses. Yet public policy is trapped in an obsolete framework with a simplistic focus on average or likely outcomes rather than on dangerous extremes. What would it take to create better analyses of extreme events in climate and finance, and an appropriate policy framework for worst-case risks? Worst-Case Economics offers accessible and surprising answers to these crucial questions.

See the video and slides from my Synapse (December 2017) webinar presentation of the book – my talk starts at 1:40 in the recording.

I also did an audio interview about the book, and a podcast based on it.

Several years ago I proposed a name for a new climate economics model, which would have had the acronym ACDC. Cooler heads prevailed, as my colleagues insisted that many people would either not recognize or not appreciate references to heavy metal bands. Nonetheless, the ACDC model would have allowed one improvement in the jargon of climate change. The scenario of policy inaction leading to a steadily worsening climate, blandly referred to as the “reference case” or “business as usual” in many models, could have been named for the band’s 1979 album, Highway to Hell. The title song offers one metaphor hinting at the problem of irreversibility, a “season ticket on a one-way ride.”

The song’s relevant insights unfortunately end there. The lyrics extol an adolescent vision of hell as daring to be bad enough to associate with unwholesome characters your mother warned you against, such as rock stars with their depraved lifestyles. Shortly after Highway to Hell was released, the lead singer for AC/DC drank himself to death, so your mother may have been onto something.

Our society, to date, is daring to be bad enough to ignore risks that the scientific community has warned us against. In the absence of sensible climate policies, we have bought our season ticket; we are traveling that highway, on a one-way ride toward ever-higher temperatures. The tipping points at which irreversible losses occur are scattered along the road, some farther ahead than others. One form of uncertainty concerns the thresholds for particular tipping points; how far down the highway is each potential disaster located? Another uncertainty involves the speed at which the world is warming; how fast are we moving on our satanic road trip? We are driving into a fog, without a working speedometer.